The elder of a pair of brothers who came for the Orb. No one knows what Sigmund saw in the dungeon to drive him mad, but his shrewd magical tactics and wicked scythe now leave little time for his victims to wonder. Despite his reputation as a vicious murderer, his grandiose and dramatic ways have earned him the admiration of many denizens of the dungeon. 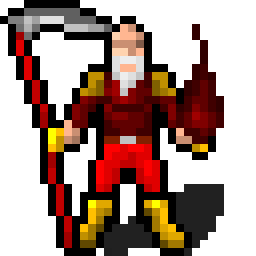 Use only polearms (and untrained unarmed combat) from XL10 onwards for weapons, including ranged weapons. This means no more nets for Gladiators and no more short blades for Enchanters. It is unlikely but possible that Enchanters will not find a polearm before XL10, in which case they'll just have to find other ways of dealing with monsters (or choose not to follow this conduct).

Have Hexes as your highest magic skill (including Spellcasting), when you have any magic skills at skill level 8 or higher. (Don't worry about other magic skills going over Hexes by a bit, or anything going over 8, as long as you make an honest effort to follow this conduct. I don't want you having to check your skills page every five minutes.)

If you don't train any magic schools over level 8, or even choose not to use magic at all, you don't need to train Hexes at all and you still qualify for this conduct.

1. Scythes Are So Bad I Forget They Exist

Use only scythes (and untrained UC) as weapons from the time you enter a rune branch. (Involuntary Abyss doesn't count but don't get the rune.) You must also train polearms to skill level 26.

As with the Weapons conduct, it is unlikely but possible that you won't find an appropriate weapon before you have to enter a branch that needs it, in which case you need to find other ways of dealing with monsters until you get a scythe.

You can almost always find a reaper in the vestibule of hell and get a scythe off of him.

Kill The Royal Jelly using only cards. Specifically, anything that is the result of you drawing a card is allowed; anything that affects TRJ that is not the result of drawing a card is not allowed. This means things like immolation scrolls, casting Discord, non-Nemelex allies, etc., are prohibited, since even if they don't affect TRJ directly, they might indirectly through other affected enemies. Fog and the Darkness spell are allowed though, as are self-buffs like Haste.

If you make a mistake and affect TRJ with something other than a card, you can retreat and try again once TRJ is back to full health and with no status effects on it.

You are allowed to attack the jelly spawns with whatever means you want as long as TRJ is not and cannot be affected. If TRJ is not present, either because you retreated up a floor or you've killed it, you can do whatever you want -- feel free to use immolation to clear up the spawns, for example.