There was once a human priest named Mennas. He travelled far and wide preaching of Zin to any who would listen, going even so far as to travel into Orcish lands, preaching to orcs about laws and mercy. By all accounts the orcs were not happy with Mennas. They demanded he swear Beogh was the one true god, and when Mennas remained silent they cut out his tongue. Whether or not this angel is that same Mennas is something of a mystery, as he seems to have difficulty speaking. 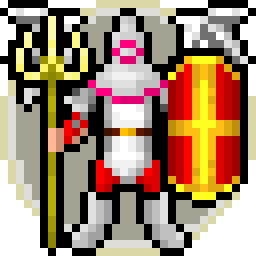 You can switch gods freely for this challenge.

Don't use any two-handed weapons.

Reach 6* piety with all three of the available gods over the course of the game. Additionally you should never intentionally go invisible, regardless of which god you are currently following.

Don't read any of the following scrolls, other than use-IDing: blinking, fear, fog, immolation, summoning, teleportation, torment. You can disable auto-pickup of these items by pressing \.

Don't enter the Orcish Mines until you have the orb of Zot. In the orb run, make your way down to Elf:3. You don't need to do anything other than get there. Zin will be extremely useful for this part of the game.