A mighty sorceress, clad from head to toe in heavy armour. Once an adventurer looking for the fabled Orb of Zot, she was cast into the Abyss and got hopelessly lost there. Toyed with by some greater power, she was stuck on the hostile plane for nearly a decade. When she finally emerged from the Abyss, Louise had become powerful indeed, but had also gone fully insane. She now wanders the halls of the dungeon, seeking other adventurers to share her fate. 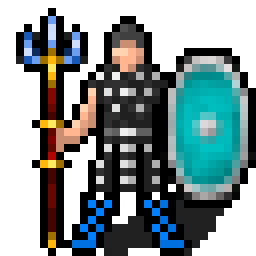 Use one-handed and thrown weapons only. This includes missile weapons, so you can use a sling or a hand crossbow, but not a shortbow or an arbalest, for example.

Train Conjurations and an elemental school (including poison) to level 12, before you get a 3rd rune.

Corrupt the Ecumenical Temple, while holding a +9 distortion weapon.

Instead of Abyssal Knight, choose either Fighter or Warper as your background. Worship any god except Lugonu, or no god if you wish. Any time after getting your first rune, but before entering Zot, enter the Abyss and worship Lugonu. Note that you must worship Lugonu to qualify for tier 2, in case you attempt this challenge and don't win. You also must enter the Abyss to worship Lugonu, even if Lugonu altars are present elsewhere.

Send The Royal Jelly to the Abyss. You can do this with Lugonu's Banish ability with a high enough Invocation skill and a scroll of vulnerability, or you can just poke it with a distortion weapon until it gets sent there.