A magical cat. Once a powerful wizard's familiar, Natasha was abandoned after her master was consumed by the very necromantic forces he sought to control. Now she patrols the dungeon, taking a bloody vengeance with spell and claw upon any adventurer who crosses her path. This cat doesn't have nine lives, but just one death isn't going to be enough to put her down for good. 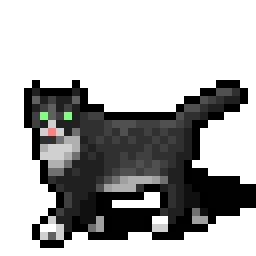 Play as a Felid.

Play a Felid, and win with one of the following conditions:

Collect a figurine of a ziggurat. You can either have it in your inventory, or use it if you want.