A sly, conniving thief. In his profession, Maurice is considered a legend — at least according to himself. He is skilled, nonetheless, and among all the thieves and rogues lured by the Orb, Maurice is undoubtedly the most crafty. 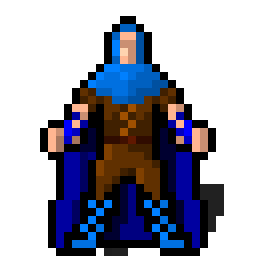 Only train Short Blades, Throwing, and Fighting for weapon skills.

Train Evocations or Hexes to skill level 14 before XL27. (At XL25 you can still reach this target even with 0 skill in one of those schools, if it's the only thing you train.)

1. Where The Wild Things Are

Get the Abyssal rune during the orb run, and win the game. It's fine if you enter the Abyss prior to the orb run, just don't pick up the rune.

Get a rune without killing anything in that rune's branch, including after you get the rune. You are allowed to affect and even hurt monsters, but they can't die through any actions you take, including creating allies and enslaving other monsters. In other words, you shouldn't gain any experience in that branch or from monsters lured out of that branch.

The Abyss is not a valid branch for this challenge. Pandemonium is, but it means you can't kill anything in Pan, which is probably not the easiest thing to do.

Honest mistakes for this challenge are forgiven, but avoid actions that would give you a good chance of killing something, e.g. confusing an enemy that can't swim when they're near deep water.