The Pits of Slime used to be a thriving civilization, and Dissolution was the prophet of their god. When the city was overtaken by its current residents, only Dissolution survived, for they alone turned faithfully to the Slime God. Dissolution became a tremendous mass of acidic ooze, yet retained their intelligence. They are filled with hatred for anything that can hold a form. 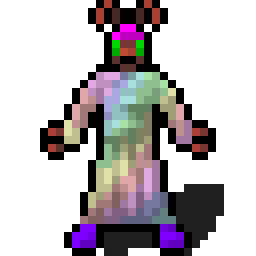 You must be following Jiyva before you enter The Depths, Pandemonium, or Hell. You can worship any god or gods, or even no god, beforehand, and can switch gods as much as you want (ignore all the usual restrictions on following a god); however once you are following Jiyva, you can't switch from them, and can only abandon them for the bonus challenge that requires you to do so.

Only train Unarmed Combat and Fighting for weapon skills.

Worship Jiyva before entering the Vaults, Elf, or intentionally going to the Abyss.

1. What Becomes Of The Body?

Worship Ru and get to 6* piety before worshipping Jiyva. Don't sacrifice love or you will not be able to join Jiyva. Getting to 6* with Jiyva earns the star.

At any point after reaching 6* piety with Jiyva, abandon them, kill The Royal Jelly, and then rejoin Jiyva. Normally killing TRJ will cause Jiyva to stop existing, but being under wrath stops this from happening, so you have to kill TRJ before Jiyva's wrath ends.

TRJ must be at full health when you abandon Jiyva.